Facebook Twitter LinkedIn Tumblr Pinterest VKontakte
In summer, the queen of fruits is watermelon. Refreshing, tasty and sweet, it provides almost 90% of water and is the best way to hydrate. But it also offers many properties and benefits for health and is suitable for many people. Discover all the benefits of watermelon below so you can include it in your summer diet. 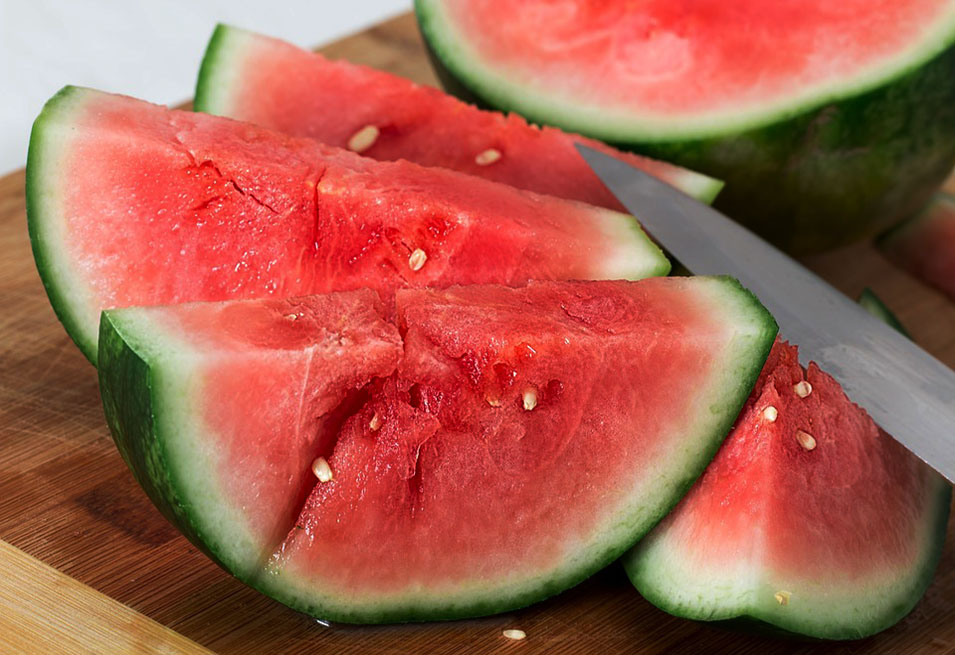 Nutrients
Watermelon, also known as pin, watermelon or melancia contains vitamin C, vitamin A, calcium, phosphorus, potassium and magnesium among other minerals. In addition, it is rich in lycopene and beta carotene. It is the fruit that contains more water (93%), so its caloric value is very low, just 20 calories per 100 grams.
Health benefits of watermelon
First of all, it is necessary to point out a couple of tips:
– First, the watermelon should be at its peak of maturity to maximize its different benefits.
– Second, it would be ideal to keep the watermelon at room temperature. In this way, it will preserve all of its antioxidants.
1. Improves cardiovascular health
Watermelon improves cardiovascular health, regulating high blood pressure, which is one of the main causes of heart attacks in people.
In a study published by Pardue University and the University of Kentucky, it was confirmed that watermelon had multiple benefits for the heart.
In addition, watermelon also helps women who are in a postmenopausal stage.
The Florida State University published in early 2013, a study in which several postmenopausal women experienced an improvement in their cardiovascular health after six weeks taking watermelon extracts.
2. Better functioning of body insulin
When suffering from a disease such as type 2 diabetes, our body begins to stop producing insulin, which leads to problems related to cell production.
As a result, the level of glucose and blood sugar becomes something difficult to regulate in our body.
Now, if we fall into the habit of consuming watermelon, we can make the creation of insulin easier thanks to the arginine contained in this fruit. Several studies have already shown this.
Therefore, if you suffer from diabetes, do not forget to add a portion of watermelon daily to your diet.
3. Improve the health of the eyes
Would you like to sharpen your vision? This interests you:
The high levels of vitamin A that watermelon brings to our body will improve your optical health, helping the development of pigments in the retina of your eyes.
In addition, vitamin A helps protect you against macular degeneration and night blindness. Likewise, lutein and zeaxanthin will act as powerful protectors.
4. Strengthens the muscular system
Do you not know how to soothe those muscle pains during and after training? Well, I do not have to tell you that the ideal food for these occasions is watermelon.
For this, there are several investigations that corroborate it:
– According to research, the citrulline and arginine found in watermelon improve the blood circulation of athletes. In addition, it reduces the aches and pains of the next day.
– Another similar study observed in turn that the intake of citrulline and arginine only benefits the novice athletes and those who begin to perform some kind of sport. On the other hand, watermelon eating was not useful for professionals and high-level athletes.
– As if that were not enough, another study from the Journal of Agricultural and Food Chemistry concluded that eating watermelon relaxes our muscles after an exhausting session of physical exercise.
Read this, if you are starting to practice some kind of sport and want to reduce the inconvenience and pain, do not forget to regularly consume watermelon or some derivative. A clear example can be natural juice.
5. Fight against erectile dysfunction
The intake of watermelon improves blood circulation. In fact, a study carried out by researchers belonging to the University of Texas A & M concluded that watermelon has very positive effects on combat impotence.
Bhimu Patil, director of the Center for Improvement of Fruits and Vegetables of the University of Texas said that “watermelon is a source of nutrients with an effect similar to Viagra, as it has stimulating effects on blood vessels and in the libido.”
This help present in watermelon is due in large part to arginine, which leads to increased libido, thus reducing frigidity. 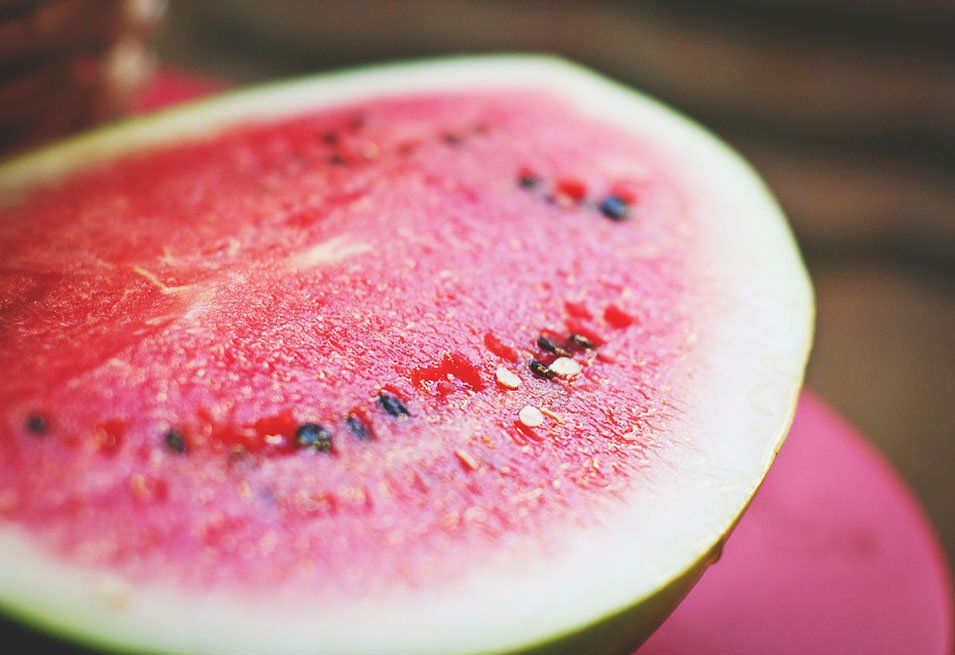 6. Powerful anti-inflammatory
In this benefit, we must refer to the power of lycopene, since it acts directly on cell damage and being an antioxidant, fights against free radicals.
In the words of Professor Jarzabkowski, “the lycopene in watermelon makes it become an anti-inflammatory fruit”.
Finally, we should mention manganese, a mineral that also acts as a powerful anti-inflammatory.
7. Help prevent cancer
Once again, antioxidants enter the scene. Lycopene fights anti-cancer cells that can harm our health. Watermelon is the food with the highest percentage of lycopene in its composition.
Dr. Mercola himself mentioned that “lycopene reduces the growth of brain tumors. In addition, after depriving mice of lycopene, breast cancer sprouted in their bodies. “
8. Great source of hydration
Watermelon contains nothing more and nothing less than 92% water in its composition.
That said, watermelon has high levels of potassium in its composition (around 5% per serving), being also a type of electrolyte that controls the levels of hydration in our body, as well as helping to oxygenate the body’s cells. Thanks to these electrolytes we can avoid strong heat shocks.
9. Prevention of diseases
There is a large number of diseases that occur as a result of high consumption of meat, eggs and dairy products.
However, thanks to the alkaline-forming effect of watermelon, we can reduce the risk of suffering diseases derived from these foods.
10. Improve our digestion
You may have heard that watermelon is an excellent diuretic.
Cynthia Sass, Health editor, said that “watermelon contains dietary fiber for digestive health, as well as potassium, a mineral that helps keep blood pressure under control.”
And indeed it is so. It is very likely that you urinate more than usual when drinking watermelon. This occurs due to potassium and its high levels of dietary fiber, which will help the elimination of toxins and the natural cleansing of the body.
11. Avoid kidney stones
This benefit has a lot to do with the help that watermelon gives to our digestion.
Thanks to the elimination of residues, we can avoid the accumulation of uric acid in the blood, which directly leads to bypass stones in the kidney.
Try replacing other types of diuretics such as coffee or even weight loss pills by watermelon. This method will be much healthier, natural and beneficial for your kidneys.
12. Good for our skin and hair
Here are two types of vitamins present in watermelon: A – with 17% – and C – with 20% -.
– Vitamin A has a molecular structure that accesses the lower layers of the skin. It is there where the collagen and elastin are located, getting to fight against the roughness of the skin.
– Vitamin C, like A, works to keep collagen levels regulated. In addition, this vitamin protects us from UVA rays and lightens dark spots on the skin. In turn, it also increases the speed of healing.
On the other hand, thanks to its high percentages of water, watermelon will help to moisturize our skin in a natural way so that it looks smoother.
13. Help keep the line
Watermelon is one of the fruits with the lowest caloric index that we can find.
Specifically, for every 154 grams of watermelon, we will ingest about 46 calories. Also, referring to the nutrition data, we will observe that it has minimum levels of fats.
Due to the citrulline that the body absorbs when eating watermelon, there will be a decrease in the creation of fat. This fall will correspond to the blockade produced by citrulline by blocking the creation of fats, thus preventing excess accumulation within our body.
Also, thanks to their high percentages in water, they make us feel more full than normal.
So you know: start eating watermelon regularly without fear of taking a few extra kilos.
14. Improves bone health
Watermelon contains lycopene, which is especially important for our bone health. Dietary lycopene, which is present in some foods such as watermelon or tomatoes, reduces the oxidative stress that normally reduces the activity of osteoblasts and osteoclasts, two bone cells involved in the pathogenesis of osteoporosis.
The consumption of lycopene is associated with healthier bones. Watermelon is also rich in potassium, which helps retain calcium in the body, resulting in healthier bones and joints.
15. Versatility
Watermelon is very versatile. So, in the kitchen, we can eat it in different ways, in the form of juice, with cheeses, accompanying other dishes … and at the time you want throughout the day.
There are a lot of amazing health benefits of watermelon. If consumed in reasonable quantities, watermelons should not produce serious side effects. However, if you eat a large amount of fruit every day, you may experience problems from having too much lycopene or potassium.
Show More
Share
Facebook Twitter LinkedIn Tumblr Pinterest Reddit VKontakte WhatsApp Telegram Viber Share via Email Print

What are the Dangers of Eating Canned Food?