Facebook Twitter LinkedIn Tumblr Pinterest VKontakte
The properties and benefits of honeyhave been known and used from ancient times. Currently, this substance is one of the most important primary natural sweeteners, whose benefits range from a pleasant taste to the palate, to the possible prevention and treatment of diseases. 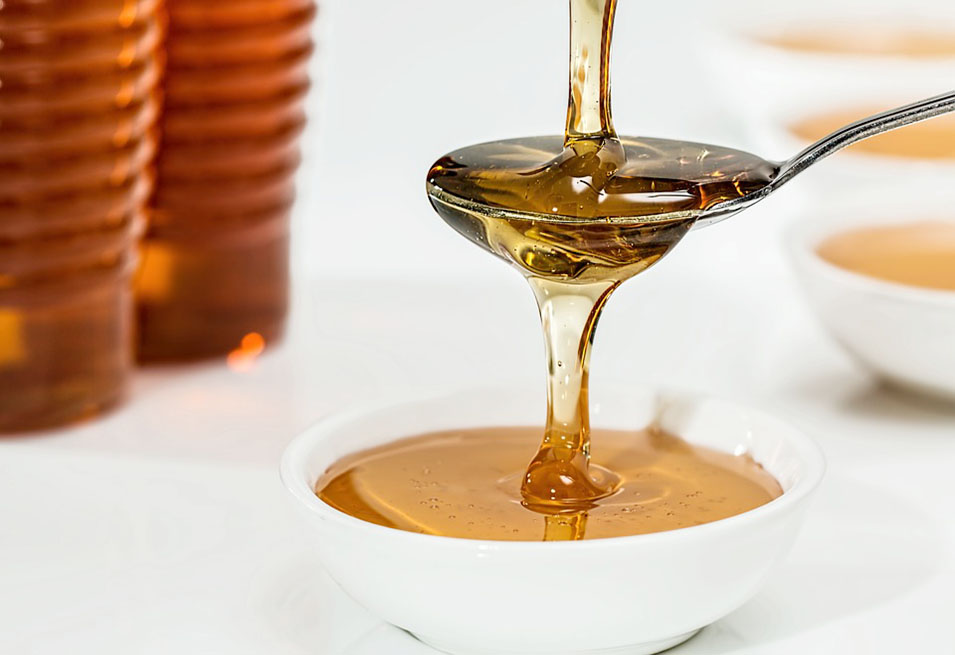 What is and how is honey obtained?
Natural honey is produced naturally by the Apis mallifera and different subspecies of bees. The latter obtain the honey by the nectar of the flowers and also by secretions released by the bees themselves.
Broadly speaking, honey is produced through a process of combining substances that bees transport, concentrate and store in combs (a set of wax cells that they build to deposit honey). Subsequently, the honey is extracted by a process that includes the discharge, the lifting, the uncapping and finally the separation of the honey from the wax. All this occurs in a previously constituted space, and with machinery and specialized equipment.
Bee honey has a complex composition rich in nutrients, which have been used for human consumption from the most ancestral societies.

The highest proportion of these nutrients is occupied by carbohydrates, such as fructose and glucose. It also contains enzymes, antioxidants, amino acids, vitamins, minerals and organic acids, which make honey has many properties. In fact, it has not only been used as food but as an important therapeutic resource.
As we have seen, honey is one of the natural resources that has been harvested the most by human beings. From the classical texts of medicine, honey appears as an important resource to treat wounds, pains and diseases.
Currently, beekeeping (the breeding of bees to take advantage of their products) is one of the most important economic activities in different countries. The latter is due to the richness of its nutritional properties and its curative potential. We will see below what are the most important properties of honey.
1. Antibacterial potential
Due to the inhibins (hydrogen peroxide, flavonoids and phenolic acids) present in honey, this substance has important properties as a bactericide. These properties are also attributed to the presence of glucose oxidase. For example, one of the antibacterial potentials of honey may be important for the treatment of acneand to exfoliate the skin.
2. Natural source of antioxidants
Antioxidants are natural substances that prevent the formation of oxides, which in turn slows cellular decomposition. In this sense, the periodic consumption of honey can be an important dietary supplement in the prevention of heart diseases, the immune system and inflammatory processes.
3. Primary sweetener
Before the extraction of cane sugar and other roots, tubers and food became popular, honey was the only natural primary sweetener. Due to its components, such as small peptides, flavonoids and enzymes, honey serves as a sweetener, but not only that. It is a protective agent that, when mixed with other foods, can enhance both the taste and its beneficial properties for health. In this same sense, the honey bee serves as a natural substitute for refined sugar.
4. It contains proteins
Bee honey contains approximately enzymes and amino acids. These originate from the activity of the bees themselves, and sometimes in the nectar of the plant. Proteins have a fundamental role in the growth and synthesis of different tissues. In turn, amino acids are the basis for protein production.
5. Potential moisturizing
The high moisture concentration of honey not only influences its viscosity, weight, taste and color, but it can be essential to moisturize different parts of our body. For this reason, it is usually used as a hair and scalp moisturizer. In this, it is important that the honey is not exposed to high temperatures since its properties can be lost.
6. Favors digestion
When combined with other natural products, such as lemon juice or cinnamon, honey can promote the activity of the digestive system. This means that it helps to metabolize food, preventing or alleviating stomach indigestion. It has also been attributed to relieving symptoms of constipation and heaviness after heavy meals. For this reason, it has also been attributed to the property of preventing reflux and helping relieve diarrhea.
7. Treatment of wounds and burns
Already from the ancient Egyptian, Chinese and Roman societies, honey was used to treat different wounds. In combination with other herbs, a honey ointment was beneficial for sunburns, wound infections and facial blemishes. For this reason, antiseptic properties are attributed to it, that is, it reduces the possibility of infections when applied to live tissue in some wounds.
8. Relieves cough and sore throat
Again when combined with other substances such as lime or lemon juice, honey bee relieves sore throat, even in small doses. Because of the antibacterial properties, they could also help to fight some infections of this type. Also honey is recognized as a natural remedy for cough (however it is recommended not to apply in children under one year). 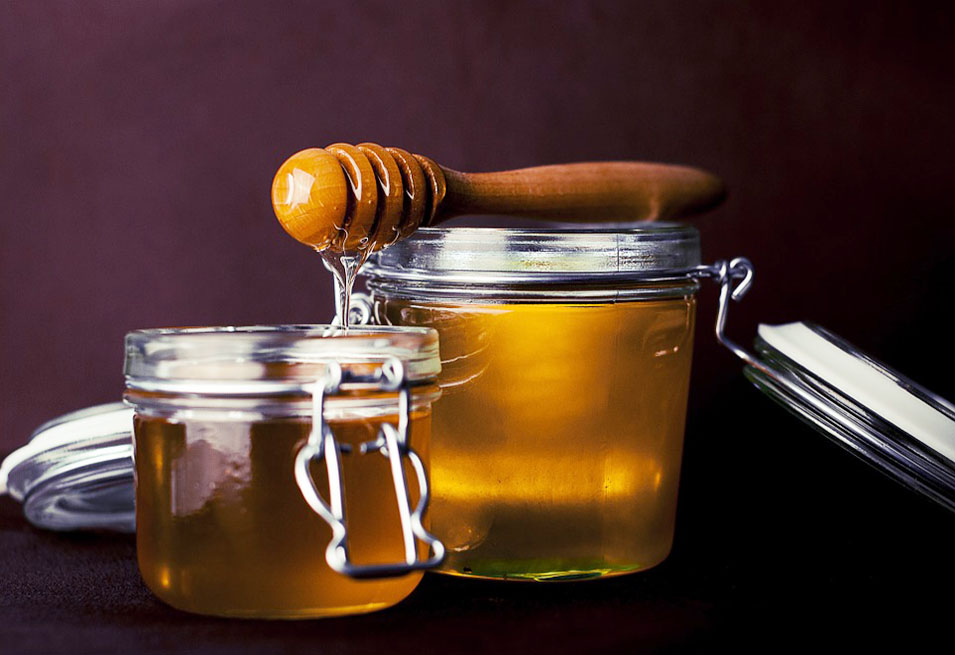 9. Anti-inflammatory activity
The direct application of honey in inflamed muscles has been used as a powerful anti-inflammatory, that is, it has been attributed the property of reducing muscle swelling. In turn, this relieves the pain caused by the same inflammation.
10. Help with allergies
According to research conducted by Dr. Zamzil Amin Asha’ari, of the Islamic University of Malaysia, the ingestion of high doses of honey improves the general symptoms of allergic rhinitis, suggesting its use as an adjunct to the treatment of this condition.
However, another study indicated that the improvements were no more important than those of the placebo treatment, so more scientific experiments are needed to prove this theory. At the moment, the belief and recipes of the grandmother continue to recommend it for this type of allergies.
11. It is a source of natural energy
Honey is a source of carbohydrates, so its combination with fruits, vegetables, whole grains and other healthy foods, will give you a great boost of natural energy. Research shows that the intake of a combination of carbohydrates and proteins immediately after exercise (30 minutes), are ideal to supply fuel and decrease the late onset of muscle pain.
Therefore, honey promotes muscle recovery and glycogen restoration after any training.
12. Help to fall asleep
Honey contains amino acids, including tryptophan, which is a precursor of neurotransmitters such as serotonin and melatonin, both of which are involved in the regulation of sleep cycles.
13. Cure dandruff
According to a study by the Medical Center and Medical Research Laboratories in Dubai, honey has antibacterial, antifungal and antioxidant activities, so they investigated its potential use to cure seborrheic dermatitis and dandruff.
During four weeks, thirty patients with chronic seborrheic dermatitis of the scalp, face and chest, applied in the lesions every two days raw honey diluted in warm water, with soft rubbing for 2-3 minutes, leaving it to act for 3 hours before Rinse gently with warm water. The patients indicated relief and the peeling was disappearing within a week. The skin healed and disappeared completely after 2 weeks of treatment. In addition, patients showed subjective improvement in hairloss.
Therefore, they concluded that raw honey could significantly improve seborrheic dermatitis and associated hair loss and also prevent relapse when applied weekly.
14. Help treat herpes
The Department of Nephrology and Urology and Alternative Medicine in Dubai, conducted an investigation to determine the effect of the application of honey on recurrent lesions of cold sores and genitals, reaching the conclusion that in addition to safe is effective.
15. Ally against cancer
According to an article by the Sains Malaysia University published in 2004, after reviewing the available evidence regarding the effects of honey against various forms of cancer, they concluded that “honey can serve as a potential and promising anti-cancer agent. That deserves more experimental and clinical studies. “
16. Treatment for conjunctivitis
A study by the Center for Specialized Doctors of Dubai concluded that the application of honey in infectious conjunctivitis reduces redness, inflammation, discharge of pus and the time for bacterial eradication. In addition, they suggest that its potency is comparable to that of local antibiotics
17. Antidepressants
Apparently honey is good for depression, because according to a study from the Center for Chemical Sciences of the Federal University of Pelotas, in Brazil, it contains a flavonoid (chrysin) of great potential as an antidepressant, similar to fluoxetine.
18. Help preserve food
According to a study from the University of Illinois, honey has the potential for food preservation, since it is a natural source of antioxidants that can help in the processing of fruits and vegetables.
19. Effective for post-surgical wounds
The Pediatric Intensive Care Unit “Chaim Sheba Medical C” in Israel, conducted an investigation to check whether the topical application of fresh unprocessed honey was effective in the healing of infected wounds of newborns.
After 5 days they observed a marked improvement, and at 21 days the wounds were closed, clean and sterile.
All those incredible beneficial properties of honeywill diminish if ingested at more than 60 ° C since the vitamins and the antioxidants it contains evaporate. The consumption of honey or other sugars in large quantities increases blood pressure, cholesterol and fat in the body. Also excessive intake can cause children and babies anxiety and insomnia passengers. So, honey should be only consumed in moderation.
Show More
Share
Facebook Twitter LinkedIn Tumblr Pinterest Reddit VKontakte WhatsApp Telegram Viber Share via Email Print

16 reasons why Health Benefits of Green Tea is so Famous!