Facebook Twitter LinkedIn Tumblr Pinterest VKontakte
The apple is one of the most common fruits on our table. This fruit has the advantage, in addition, that it is suitable for people of any age because of their caloric and sugar contributions are not significant, which makes it compatible with most nutritional diets and medical treatments.
In one way or another, we have become accustomed to its presence. We can consume it in its natural state, in salads of any kind or even in more elaborate dishes. However, few really know what the benefits of the apple are. 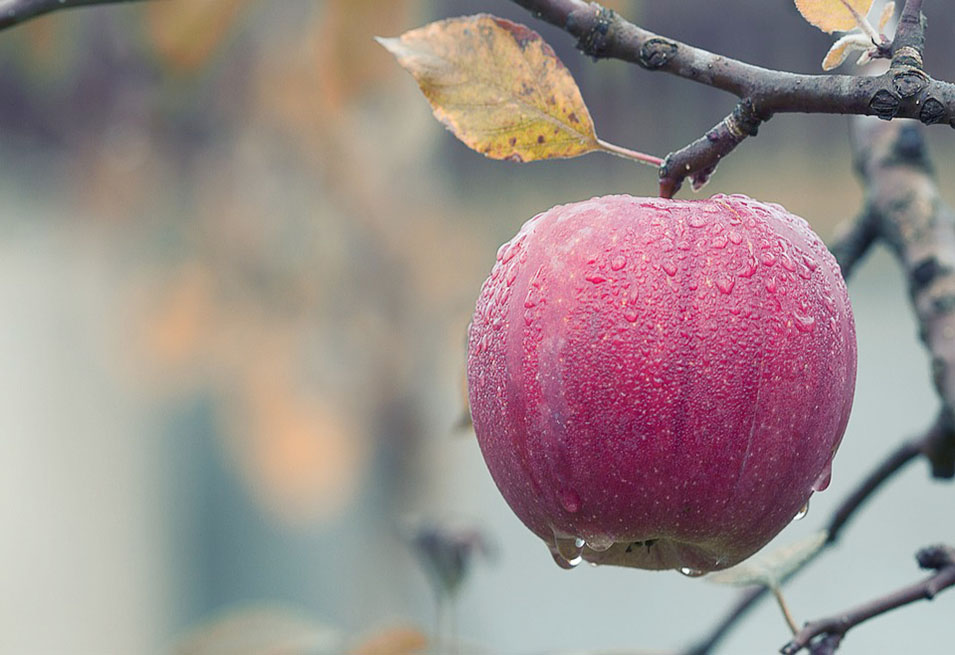 Different studies worldwide have highlighted the fact that people who eat at least one apple a day are less likely to smoke, have higher levels of intelligence and, in general, lead a healthier lifestyle.
Each year more than 40 million tons of apples are produced in the world, which places them in fourth place in the world production of fruits, after grapes, oranges and bananas.
Properties of the apple
The healthiest fiber
The apple is rich in pectin, a type of soluble fiber that is not absorbed in the intestine. Retains water and becomes a gel that acts as an emulsion that absorbs waste in the intestine and facilitates the elimination of toxins with feces.
Unique organic acids
They represent between 1% and 1.5% of the weight of the apple. These acids produce an alkalizing effect (antacid) in the blood and tissues when metabolized (acidity favors inflammation and the appearance of diseases such as cancer). In addition, renew the intestinal flora, avoid fermentation and act as a natural toothpaste.
Tannins and flavonoids
The apple is, after the quince, one of the fruits with a higher content of tannins, which are astringent and anti-inflammatory.
As for the flavonoids – present in many fruits and vegetables – they prevent the oxidation of the “bad” LDL cholesterol, which prevents the arteries from being deposited in the walls.
Vitamins and minerals
Among its vitamins, C stands out: an apple can cover 30% of daily needs.
It is rich in boron, a mineral that intervenes in numerous functions of the organism. One of them is to facilitate the assimilation of calcium and magnesium, which helps to prevent osteoporosis. The apple is one of the fruits richest in boron.
It also provides some vitamin E (0.32 mg / 100 g), potassium (140 mg) and phosphorus (10 mg), all in small proportion.
15 amazing health benefits of the apple
1. Improve your immune system
Apples are rich in a type of plant compounds called phytochemicals. These inhibit cell proliferation and regulate the immune system and inflammation, helping in the fight against chronic diseases.
In particular, the most common phytochemical that can be found is the flavonoid.
Antioxidants are another important point to try. Apples are among the foods with the highest percentage of this component. These molecules fight against the different free radicals in our body.
2. Prevent cerebrovascular and cardiovascular diseases
Its continued intake makes LDL cholesterol levels (considered “bad”) to decrease, preventing a hardening of the arteries – atherosclerosis – and, consequently, a stroke or a heart attack.
In 2012 Ohio State University conducted a study with 51 participants. Three groups were formed: some ate apples, other antioxidant supplements and the last placebo.
The group that consumed apples reduced blood cholesterol by up to 40%, and as a consequence, the likelihood of contracting a heart problem.
3. Decrease the risk of diabetes
It should be mentioned that apples do not act in the same way for all people in this type of case. Even so, they usually help prevent type 2 diabetes.
Therefore, consuming apples is a good choice to try to stop the onset of diabetes.
4. Excellent for the denture
Apples contain an astringent effect that cleanses and detoxifies our teeth thanks to the bacterial properties they possess. In this way, the appearance of dental caries will be prevented. Even its chewing helps the production of saliva in our mouth to increase considerably.
Despite this, we should not forget to brush our teeth: eating apples helps, but obviously it is much more effective to brush our teeth.
5. Prevention against gallstones
A high level of cholesterol will cause gallstones to form – especially in the gallbladder – due to the solidification of bile. This occurs most assiduously in people who suffer from obesity.
Due to the high percentage of fiber in the apple, it helps maintain the liquidity of the bile and prevents gallstones.
6. Improve vision
In its composition, the apple contains high levels of vitamins A and C that act on our eye blood vessels.
On the other, vitamin C works as an antioxidant that protects our eyes against cataracts, macular degenerations or loss of visual acuity. 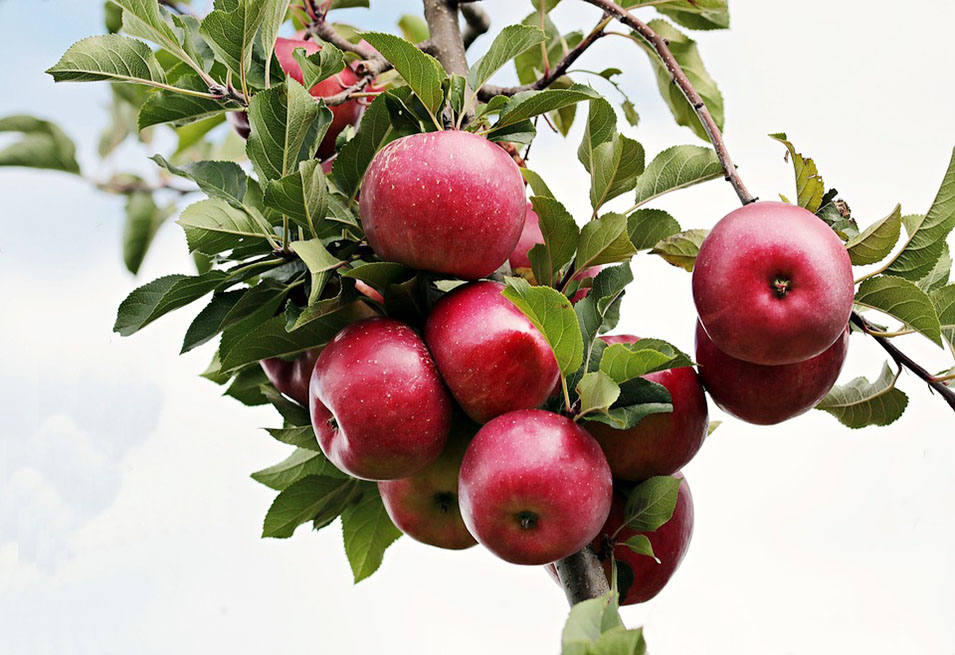 7. Prevent cancer
Due to the different antioxidants they possess, apple act against free radicals, preventing the formation of cancer cells.
Especially we talk about an antioxidant called procyanidins. This helps prevent different cancers, but especially the colon.
As a result, thanks to research, it is known that people who consume an apple or more a day, reduce the risk of colon cancer by 20% and breast cancer by 18%.
8. Protection against metabolic syndrome
Metabolic Syndrome protection is described as the “conjunction of several diseases or risk factors in the same individual that increase the chances of suffering from brain, cardiovascular diseases or even diabetes”, the apple causes the effects of this decline.
According to a study conducted by Dr. Victor Fulgoni in 2008, 27% of apple consumers are less likely to be diagnosed with the Metabolic Syndrome.
The doctor said that adults who eat apples and their derivatives have smaller waists, lower abdominal fat, lower blood pressure and lower risk of developing Metabolic Syndrome.
9. Fight against degenerative diseases
Antioxidants make the chances of getting Parkinson’s or another degenerative disease like Alzheimer’s go down.
For this benefit, it is recommended to eat the apple with the shell included, to keep all its antioxidants.
On the other hand, flavonoids and quercetin, present in the apple, can function as a potent risk reducer for this type of disease.
10. Help to lose weight
One study showed that women who ate one and a half apples a day lost approximately one and a half kilograms after 12 weeks.
This occurs thanks to the high amounts of fiber they contain, decreasing the amount of energy in the body. The combination is perfect to reduce a few kilos more.
Our stomach will empty more slowly, which means that we will feel fuller for more hours, eat less, and absorb nutrients more efficiently.
11. It protects us from intestinal problems
The fiber that the apple contains helps fight intestinal problems. Among these are diarrhea, constipation or Irritable Bowel Syndrome.
Fiber works in two ways, depending on the type of problem we suffer:
– A slope to help us go to the bathroom
– The other one to stop going to the bathroom.
Although it seems contradictory, fiber works like an intestinal regulator that works according to our needs.
12. Improve the respiratory system
The antioxidants found in the skin and skin of the apple, work as a natural antihistamine and anti-inflammatory, improving the respiratory system.
A study conducted in 2007, showed that mothers who consumed apples during pregnancy made their children less likely to suffer from asthma or wheezing.
In addition, it was shown that apples were the only food directly related to the reduction of respiratory problems. The women who consumed the most, saw the problems reduced by 27% in their children.
13. Treat anemia
Thanks to the iron that can be found in the composition of apples, anemia will no longer be such a serious problem.
It is known that anemia occurs due to a deficiency in the blood of hemoglobin, which can be replaced with iron. As a result, the number of red blood cells in our body will increase, and therefore, our health will be enhanced.
As a plus to this benefit, it should be noted that the increase in red blood cells will improve the oxygenation of the body, so that our organs will function in a much more fluid and correct manner.
14. Enhances our immune system
When we fall into a disease it is difficult to recover and feel strong again. Because of this, the apple has been used as an object of recovery.
For example, thanks to its nutrients – especially pectin, this fruit will increase our muscular strength on the one hand or activate more quickly our defenses in a matter of falling ill.
15. Natural relaxant
Its phosphorus content makes it have a relaxing effect, so it helps to get to sleep.
As we see the properties of the apple make it an excellent option to include in our diet, they are also available throughout the year. Remember:
– An apple a day keep the doctor away –
Show More
Share
Facebook Twitter LinkedIn Tumblr Pinterest Reddit VKontakte WhatsApp Telegram Viber Share via Email Print

What are the Dangers of Eating Canned Food?